Welcome to the next instalment of my travel series: Angkor Wat, Cambodia! I’m so excited to share this next part of my journey with you guys, I honestly wasn’t too sure what to expect from Cambodia before I arrived, but it was honestly one of my favourite places and incredibly distinct from all the other countries we’ve visited along our journey.

The most interesting part of Cambodia was all the temples, and how they different from Laotian and Thai temples. The temples in Cambodia, rather than intricate paintings and mosaics, had carvings into the rocks that had meanings and stories carved into them.

Cambodia has huge amounts of temples, both big and small, and in relative stages of so while some are nearly perfectly preserved some are quite interestingly growing back into the surrounding nature. Unlike many of the temples you’ll find in and nearby towns in other South East Asian countries, and the temples that visitors travel to most in Cambodia are out in the jungle. You can choose to go to as many or as few as you’d like, with the most well-known and largest one being of course, Angkor Wat.

I figured this entry would be a good place to share some tips I have for temples (both in Cambodia and elsewhere in South East Asia), as well as what to expect before I go on to cover the day we had exploring these temples!

All you absolutely need for a day exploring temples is the right supplies, appropriate attire and a good guide.

In terms of the guide, if you ever visit Siem Reap, message me and I’ll have you covered. My friend recommended us the most amazing Tuk Tuk driver named Sorn, who was friendly, knowledgeable, spoke great English and just generally made our whole stay in Siem Reap so much better. He had great recommendations and all kinds of knowledge that made our lives so much easier. So, if you ever get the chance to visit Cambodia, shoot me an email or comment on this post and I can put you in contact with him! 10/10 really made our stay sooooo much better.

Next up: appropriate attire. So, as I’m sure I’ve mentioned before, when you’re visiting temples you have to show respect with appropriate attire. It’s not optional, but all you have to do is be sure to cover your shoulders and knees and not wear a hat or shoes inside marked areas and you’ll be okay. Some countries have more strict rules about what you can and can’t wear, so this wasn’t bad at all to follow. If you’re planning on walking a lot, running or hiking shoes are also a good idea. 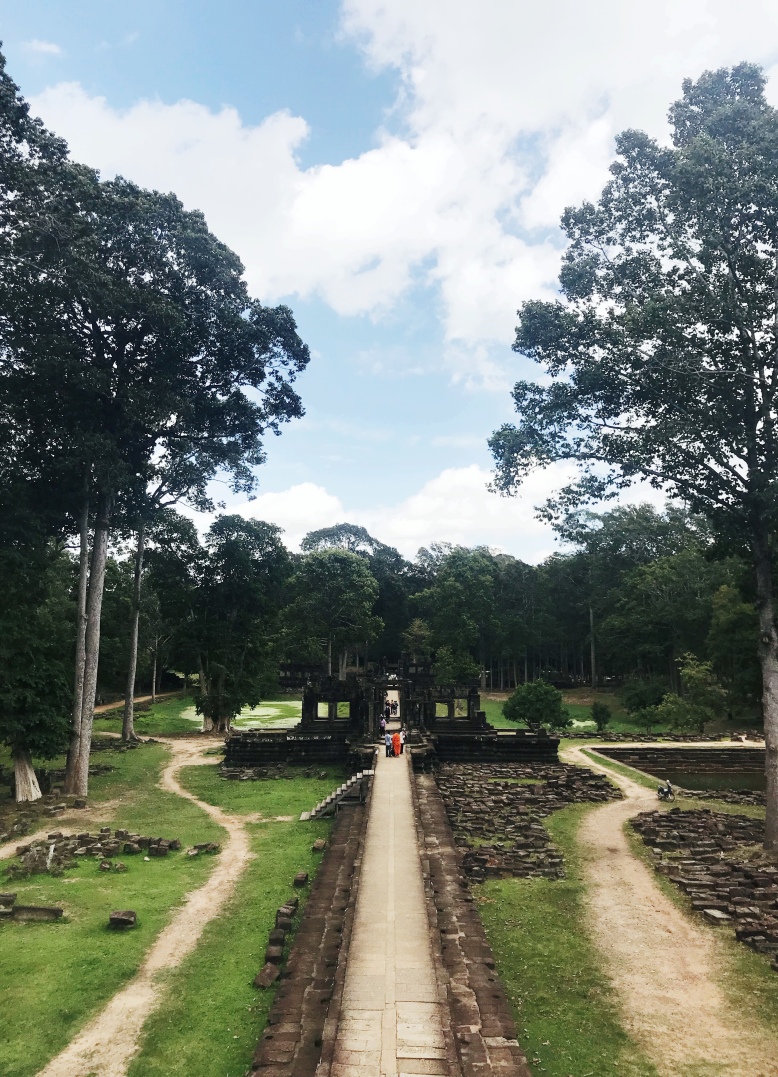 For clothes, while simply wearing leggings and a short sleeve top will be enough to have you covered (literally), there is a reason that every nearby stall sells the classic touristy elephant pants and related temple clothes. These clothes are so beyond comfortable and lightweight, and will help keep you from overheating in the hot weather. I personally opted for a t-shirt and a skirt I bought locally, they both kept me covered and cool, even in the peak heat of the day. Something else to note though is to be careful and look into what’s allowed before you purchase it, however, as Nylah bought a sarong and didn’t realize until we had reached the sacred temple in Angkor Wat that while it covered her knees, it was not appropriate attire.

A Tree Growing Out Of Banteay Kdei

The last thing you’ll need are the right supplies! Based on my own experiences, the absolute necessities are water, snacks, sunscreen, cash, sunglasses, and hair ties. However, hydration salts, cameras, hats, and a change of clothes certainly never hurt. If you have space to bring more stuff, it never hurts to be over prepared!

Well, first and foremost I’d say expect a very long day. Angkor Wat alone takes at least an hour and a half to explore completely at the bare minimum. Not only that, but you have to budget time for any other temples you wish to see, as well as travel time. Realistically, you should dedicate a whole day to temples.

Another thing to prepare for is a lot of walking, but nothing insane. So many people I know who have visited Angkor Wat before have made it seem as is it’s a gruelling and nearly impossible hike, which is far from the truth. Yes, there is a lot of walking — and occasional climbing involved if you want to go up to higher levels of the temples. However, it’s nothing that I feel like isn’t suitable for beginners. It is of course, incredibly hot, and likely pretty crowded during peak tourism seasons, so it’ll be a tiring day no matter what your level of fitness. But no matter what, I promise it is 100% worth it!

The best part about going to Angkor Wat and the nearby temples in the summer months is that it is not a popular time for tourists, meaning many of these sites were near-empty. In total, we toured 5 different temples along a route Sorn, our Tuk Tuk driver prepared for us. Before I get into it, I’m going to put a little disclaimer on this: While I tried to keep track of which temples we visited, I’m not 100% sure I have the right list. I’ve been researching to make sure I have it all correct, but if I’ve mixed one up please message me and let me know!

We started with two smaller temples, Banteay Kdei and Ta Prohm, with a quick stop in at the Ta Keo Temple, before carrying on to two larger temples in Angkor Thom, the Bayon Temple and the Baphuon Temple. Finally, after all of this, we headed to Angkor Wat.

The first two temples were small and practically empty, which made them incredible to explore. Both of them appeared to not have had any restoration completed such as the others were undergoing, and were slowly deteriorating and becoming part of the jungle surrounding them. At the first temple, Banteay Kdei, Nylah and I were guided in prayer by a local at the temple, who gifted us with good luck bracelets while we explored.

The second temple we visited, Ta Prohm, was small and well-known for its unique look that inspired the temples in the Tomb Raider franchise. It was a little larger and more crowded than the first temple, but still relatively small and empty compared to the others and incredibly beautiful. Seeing how this temple had literally grown into the forest was breath-taking and having it be as empty as it was made for a less touristy-feeling experience.

After that, we stopped in quickly at Ta Keo, which was also quite empty and quite tall, which made for a crazy cool view. I opted to not go all the way to the top as I was under the impression that Angkor Wat was going to be more challenging than it was, but Nylah said the view was spectacular and even from the lower levels it was a nice, quiet overlook over the nearby jungle.

From there, we headed over to Angkor Thom. The Bayon Temple was certainly the most busy of the temples we visited, as well as the most tiring. However, it was also one of the most large and interesting, sporting three levels, courtyards, maze-like hallways and of course, the Buddha heads carved into the pillars on the top level of the temple. I’d certainly suggest to pay attention to the signs telling you which direction to head in to make sure you see the whole temple in a timely matter and without getting lost.

After that, we headed to Baphuon. This temple was larger AND empty, allowing us to walk up to the empty higher levels and enjoy the views in peace, with absolutely no one else around. 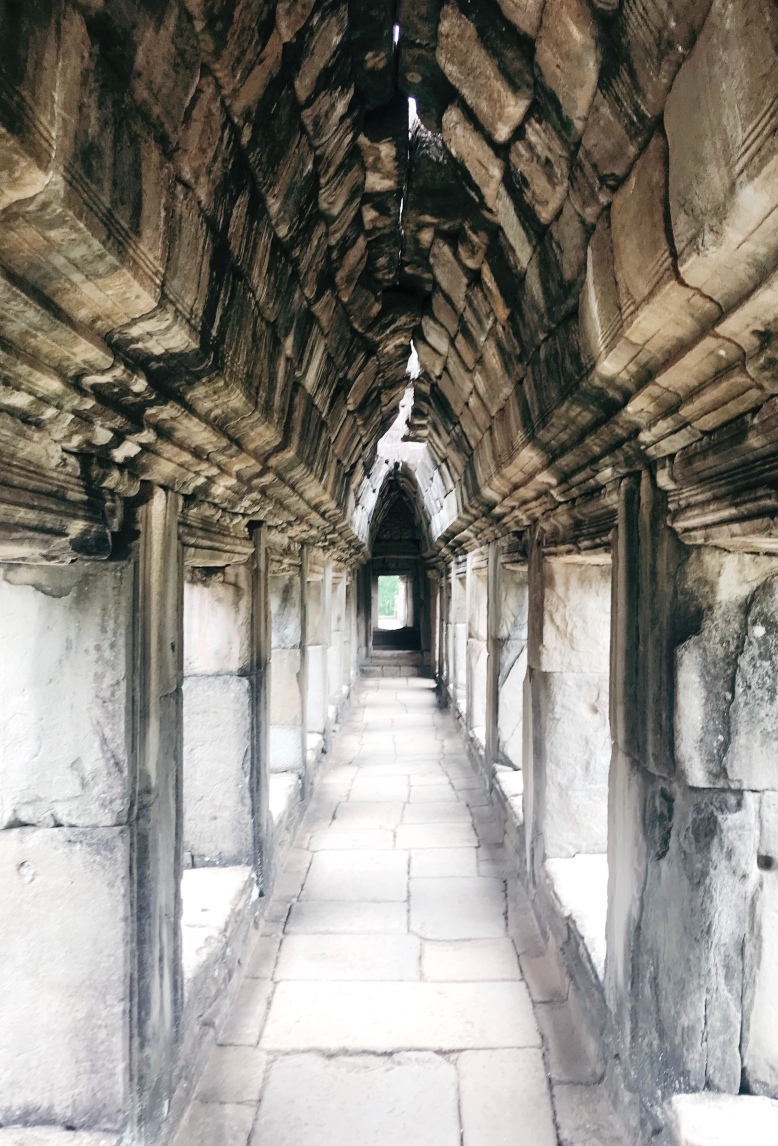 After that, as I’m sure you’ve all been waiting for, we headed off to Angkor Wat. Before we even got to the entrance, you could see how absolutely vast it was. Angkor Wat is the largest religious monument in the world, and it certainly was massive. It took a while to cross the grounds over the sacred temple, but apart from that and the set of stairs leading up to the temple it wasn’t physically challenging at all. The temple itself was beautiful, and almost empty compared to the massive crowds Angkor Wat draws in peak tourist season. It was so beautiful and just serene.

After we toured the main temple, we took some time to walk down the hallways, covered in intricate carvings, as well as smaller temples that lined the sides of the walkways. After that, we wandered the grounds and took in the views around us.

Overall, it was an amazing experience and I’d highly recommend it to anyone who has the chance. The temples of Cambodia are so distinct from other South East Asian temples, and getting to go when it wasn’t peak tourist season made for a much more relaxing, spiritual and enjoyable experience than if it were packed with tourists. 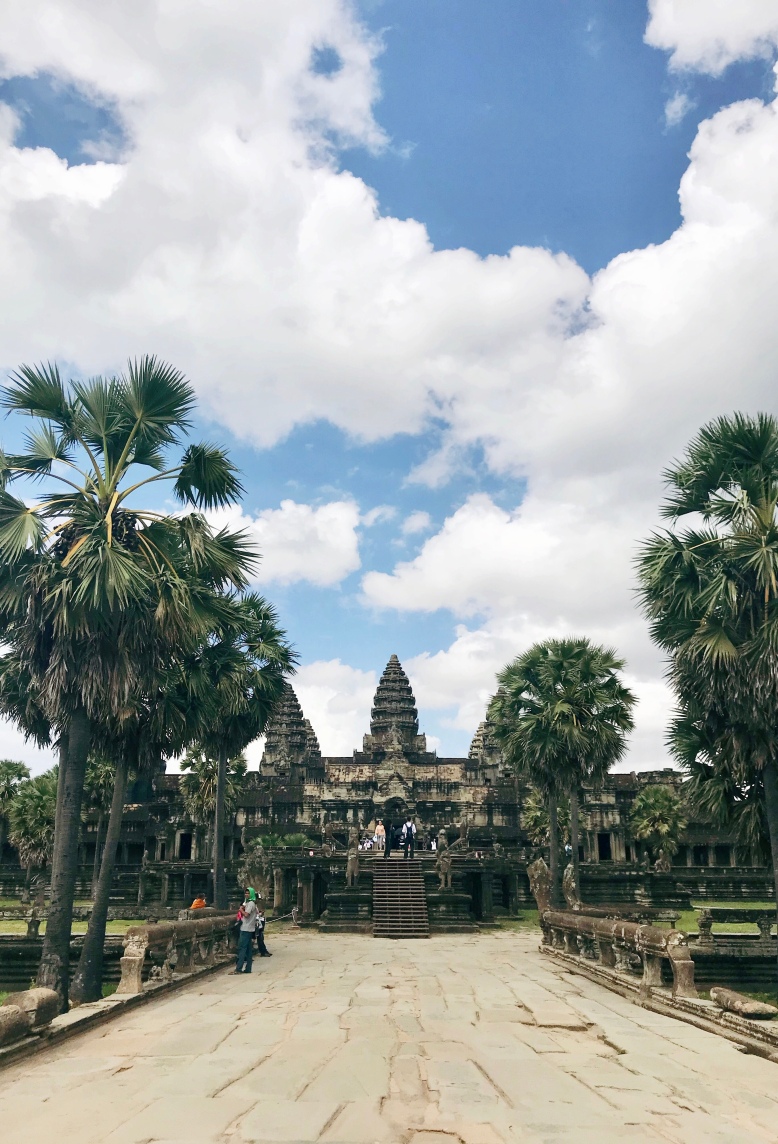 And that’s all for Angkor Wat! Stay tuned to hear all about my favourite things to do in Siem Reap later this week! Hope you all are having a fantastic Thursday!

2 thoughts on “Spend A Day With Me At Angkor Wat!”